Eulogy for a Red Barn 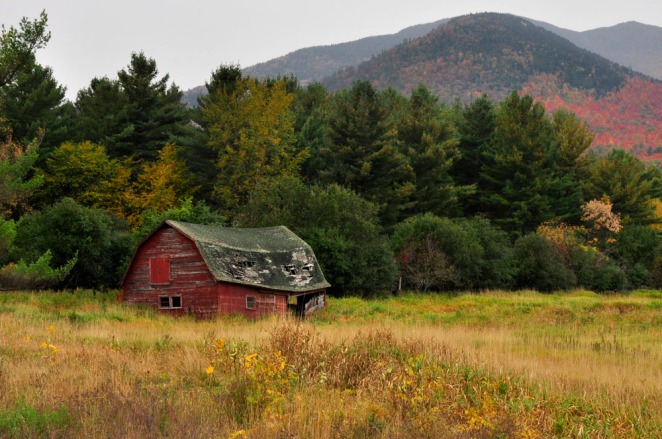 This old red barn in the heart of the Adirondacks was a mecca for photographers. Situated on Route 73 in Keene, New York, it regularly attracted travelers who happened to be driving that road between the Adirondack Northway and Lake Placid as well as those who, cameras in hand (or in their cars), made it a deliberate destination.

The last time I saw the barn, in early November of this year, I noticed that a pullout with real parking spaces had been added fairly recently, and I assumed that local authorities had decided, for safety’s sake, to take this measure to accommodate the motorists who were otherwise parking somewhere along the well-traveled road.

Perhaps I was correct in my assumption. But this particular use of the shiny new parking spaces was short-lived: despite intense efforts to save it, above all via a Facebook page spearheaded by New Jersey photographer Nick Palmieri, this beloved icon, one of the most photographed landmarks in the Adirondack Park, was torn down shortly before Christmas because officials had deemed it unsafe and beyond repair.

It’s difficult to pin down the exact history of the red barn. Apparently it dates from the first half of the twentieth century and actually was a functioning barn at one time. After surviving other repurposings, the barn was left deserted and the land it stood on is under the jurisdiction of the state DEC. With its red color it provided photographers with a perfect background to the field and mountains in all seasons, and its increasingly dilapidated state tended to add to its charm–until officials decided its days were numbered. The intrepid old barn had, somewhat miraculously,  survived many a tough Adirondack winter (not to mention the ravages of Hurricane Irene five years ago), and perhaps it was thought unlikely to survive the winter of 2016-2017.

So, all we have left of the beloved red Adirondack barn are memories and photographs.  Above is a photograph I took in 2013. Below is one from my last visit, nearly two months ago.

If you would like to purchase a print or other memento of the barn with one of these images on it, please click on the photo you would like and it will take you to my website.

3 thoughts on “Eulogy for a Red Barn”