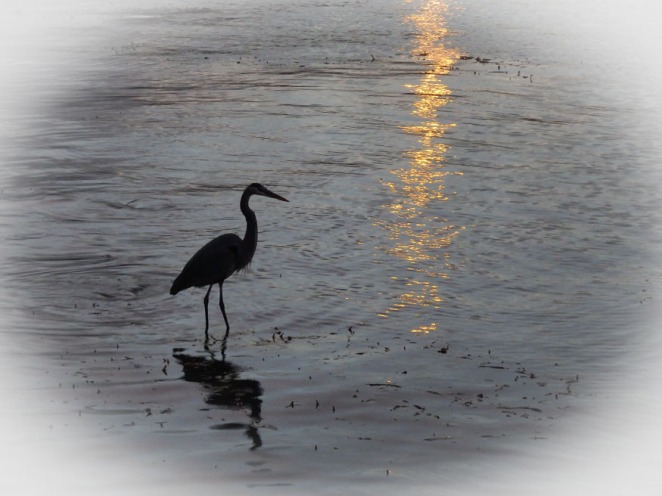 First, I don’t pretend to be an avian photographer. Avian photographers are people who take pictures of birds using bazooka lenses that look as if they evolved from cannons (ha! pun intended) that had their heyday at the Battle of Gettysburg. Avian photographers also have an amazing degree of patience. You can’t ask that Bald Eagle or that Song Sparrow to strike just the right pose in the right kind of light — you have to wait … and wait … and wait for the bird to do it. And don’t forget the catch light in their eye!

I don’t have that kind of patience. And my bazooka lens, a Tokina AT-X 80-400mm, is, in my hands anyway, better suited for shooting stationary objects like lighthouses rather than birds that you may capture on the wing. But what I do have is an amazing little point-and-shoot, the Olympus Stylus SH-1. It was recommended to me by fellow upstate New York photographer Dan Burkholder. In fact, the first time Dan and I met, at the reception for his gallery show in Hunter, we recognized each other because we each had this camera hanging around our necks.  With its zoom that reaches to an astounding 600mm, this Olympus is capable of getting bird close-ups that (for me, anyway) would otherwise have been impossible.

The image of the heron, above, is the closest I’ve ever come to “avian photography” with the Olympus Stylus SH-1. I was in San Diego on a business trip, and the heron obligingly posed in the waters of the harbor right outside my hotel. (I had gone out just after breakfast to photograph the ships–I have a thing about anything nautical–and this guy was there as an added bonus). Otherwise, as far as photographing birds is concerned, I find that this handy camera has various other uses. For example:

getting record shots of the birds that visit my feeders in winter (visual confirmation of the ticked boxes on the lists at the back of my Kaufman Field Guide), such as

Mr. Downy Woodpecker (the red cap identifies him as male), who seems to have moved in permanently; I sometimes see his mate, as well as a second male who is, in the opinion of the first Mr., avis non grata; or —

this White-Breasted Nuthatch. These are aggressive little 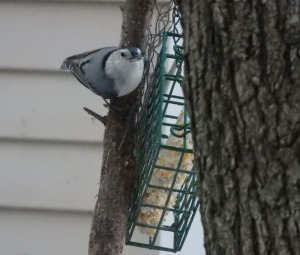 birds who are able to run up and down trees, and when they run down, they go head first. Cute to watch. Always on the move, they’re difficult to photograph and so you have to keep shooting successively in hopes of getting something fairly usable.

Another application for photographing birds with the Olympus: Boasting rights, so I can email a photo such as this one of a White-Throated Sparrow to my birding friend in New England as proof that my feeder got one of these guys before his did. (Yup, that white stuff is snowflakes. This is the Northeast, remember.)

And similarly — to send to my birding friend for identification: Is this really a Carolina Wren? Yes,

he confirmed, and I’m at the northern end of their range.

Finally, here’s one that I like to think goes beyond just a plain old bird snapshot. This Red-Tailed Hawk was perched in a tree at the McIntosh Audubon Preserve in Bristol, Rhode Island last month, patiently waiting to find someone to eat. Very patiently. And he wasn’t bothered by my walking slowly and ever closer to where he was. He had his back to me and eventually I was 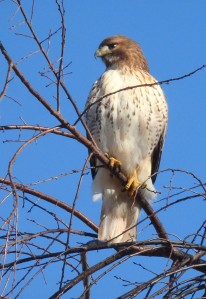 able to pass the tree and get some front shots of him — even with that all-important catch-light in his eye. Eventually he did swoop down on something but I don’t think he caught it. He landed in a tree on the opposite side of the field, but after a time returned to his original perch. To think that I was almost going to leave the Olympus in my car and just take the Nikon DSLR. Moral of the story: Never ever ignore that little inner voice that whispers a suggestion. 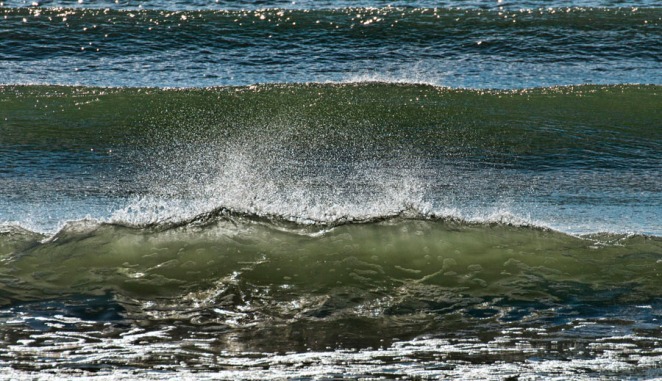 Photographers who teach and write will often tout the benefits of returning to a spot again and again. It pays to get to know a place well. The season of the year, time of day, weather, light — there’s a whole host of factors that, in an almost unlimited number of combinations, will pretty well guarantee that the spot will never look exactly the same twice. Add to that such factors that are more under your control — your vantage point, lens, focal length, exposure, etc. — and if you’ve found a place you like, it can be a virtual goldmine of different images for you.

I’m going to illustrate this for you with examples of images I’ve made from one of my favorite spots over the years: Second Beach in Middletown, Rhode Island. Water, sand, rocks, light, people — all these and more go into ensuring an endless variety of photo opps. 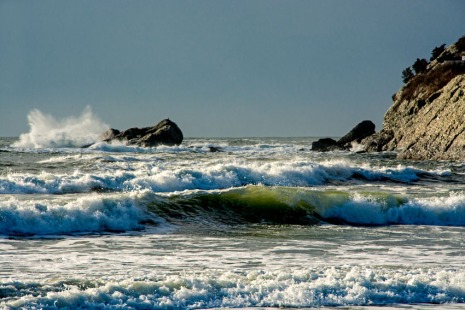 The rock with the wave breaking against it is for me one of the main visual attractions on Second Beach. Rhode Island’s coast is often windy and it didn’t disappoint on this January morning. It’s a matter of taking several shots, trying to anticipate what an approaching wave is going to do, and hoping you got a couple of good images out of the perhaps dozens you took. Tip for wave photography: Be sure your Exposure Delay Mode is turned off!

Here’s a complete contrast. The tide is in and the water is calm. I made these images in the evening in order to be able to get the long exposures needed to get that ethereal look in the water.

This features a close-up of the piece of rocky coast that’s on the right of the first image. I deliberately heightened the contrast between light and shadow in order to make the most of the morning sun highlighting the people.

When the waves are up, this is a popular spot for surfing, including surfing on these stand-up boards, which attracts all ages. Here I’ve turned slightly to the left to make the most of the golden early morning light. In the background is the silhouette of Sachuest National Wildlife Refuge, a favorite site for photographers and birders alike.

Again looking left, this time a wide-angle view featuring clouds and reflections toward the evening.

Finally, a classic example of “Don’t forget to look behind you”: the spires of St. George’s School against a red setting sun.

Another featured attraction close by is the famous rock where Bishop Berkeley used to sit, ponder, and write. It was Bishop Berkeley who posed the question, “If a tree falls in the forest and there’s no one there to hear it, does it still make a noise?” Berkeley’s rock is a photo opp all in itself.