The foliage here in the Northeast has been a bit of a bust this year, but the marshes, with their autumn-golden grass, never disappoint. I got to photograph two marshes during a brief trip to Rhode Island last week–one from the little parking area at the Coggeshall Farm Museum in Bristol and the other a hidden gem on Jamestown island. These images are quickly processed from the jpg versions. When I have time, I’ll give them (and others) the full treatment, putting the Raw files through Lightroom and then Photoshop.

The image at the top of the page shows the marsh visible from the Coggeshall Farm. The sky during a break in the almost relentless rain on this day added some drama.

The marshy land in the Great Creek was quite a discovery. I was on my way to photograph the famous Jamestown Windmill and happened to pass this. The windmill was quite close by, so it was easy to turn around to go back to the creek, which had its seemingly statutory now-closed-for-the-season seafood shack in whose parking area one could stop. 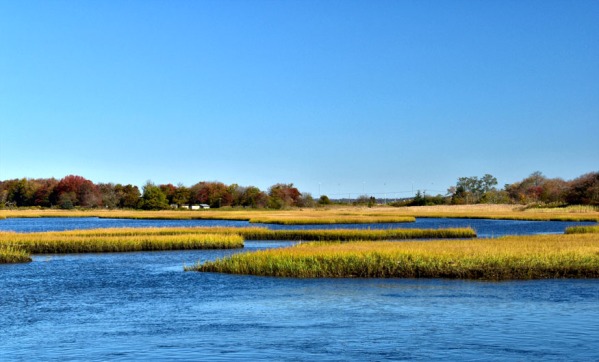 I always love the way the marshland itself intersects with the surrounding waters to produce interesting shapes and what sometimes appears like a maze–Cape Cod has its share of those, as do the Essex marshes north of Boston–and for this shot I wished I were about six inches taller to have been able to minimize (or better, eliminate) overlap between the different sections of marshland. Anyhow, if you think you see a bridge lurking in the background, guess what–

–you were right! The Pell Bridge, which connects Aquidneck Island (on which Newport lies) with Jamestown island. I got several shots but like the way this one includes the flag.

If you’re in (or visiting) the Hudson Valley during November, we’d love to welcome you to an art show opening at the Emerge Gallery on Main Street in Saugerties. The theme is “Petit”–it consists of smaller works of art–and I have two pictures in the show. In addition to the framed works on display, a variety of matted prints is also available for sale.