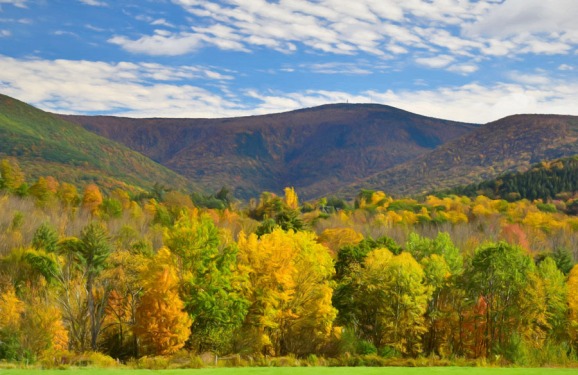 This is Mt. Greylock, at 3,491 ft. the highest point in Massachusetts. Specifically, it’s located in the Berkshires region, a culturally and naturally rich area in the western part of the state. I took this picture during my visit there in October. The mountain, which has a motor road up to the top, is easily reached from Williamstown, a lively college town where I stayed.

If you look closely at a point to the right of the center of the image, you’ll see a tower. I could have cloned it out but I deliberately didn’t, in defiance of the purist view of nature photography that rejects any hint of human activity. Think of iconic peaks of the Northeast USA such as Whiteface (Adirondacks, NY) or Mt. Washington (Whites, NH); those of you in other parts of the country can undoubtedly name your own. Both these mountains have important structures on top. What’s a photographer to do when entering a picture of one of them in, e.g., a nature competition or forum? Clone the structures out  and thereby produce an unnatural image? Avoid shooting the peak at all, at least from the angles from which the structures are visible?

Rhetorical questions. The point (no pun intended) of Greylock’s tower is that it’s a broadcasting tower. For years it has broadcast the signals of WAMC Radio, the local NPR station for northeast New York and western New England. Now, because the TV station that also uses the tower is leaving, WAMC has the opportunity to purchase the tower for itself and thereby assure its future. Fundraising is taking place right now, in advance of the usual February fundraiser, to ensure that the tower on Mt. Greylock remains a beacon for our area.

If you’re visiting or live in the mid Hudson Valley, you might want to stop in to the Emerge Gallery in Saugerties to enjoy the current show, Primar(il)y Red: An Exhibition of Art Celebrating the Color Red. My popular photograph of the old Adirondack Barn at the junction of Rts. 73 and 9, which was demolished a year ago, is in the show. The barn has been an important part of Adirondack history and I’m glad to have been able to preserve its memory in this way.

Happy New Year to all my readers!