Want to make your photographs look like a masterpiece by a famous artist? I used to (half jokingly) dream of the day when a click of the mouse could turn a photograph into a work of art by one of my favorite painters. These days, thanks to plug-ins and programs from Topaz Studio and other places, I can pretty well do just that — well, almost. If you want to produce your own Rembrandt, Degas, Van Gogh, Cezanne, even Da Vinci, the software is there. But, wedged as I am between the Hudson River and the southeastern Catskills, my dream has me pursuing the artists whose work inspired me to live here in the first place: the 19th-century landscape artists known as the Hudson River School.

If you want to produce your own Thomas Cole, Frederic Church, or Asher B. Durand, the presets don’t exist (at least, not yet). But that’s OK — because if you’re determined enough, you can use your own ingenuity to figure out how to do it, and in the end, that’s really more satisfying.

Take the painting — I mean, the photograph above. It’s of a lake in the Woodstock area, and I photograph there frequently. In the 19th century,  Hudson River School painter  Jervis McEntee, when he wasn’t painting in or near his native Kingston, used to roam that area and produced a couple of paintings of it. McEntee’s rather subdued style, coloristically speaking, appealed to me as a corrective to my occasional tendency to post-process my photos in grungy, gritty ways, and I decided to see if I could derive inspiration from my 19th-century neighbor. This image was processed using a combination of a Nik Color Efex Pro preset and a filter on Photoshop CS5. It took some trial and error and in fact I ended up with two or three different final versions, but this one is my favorite. 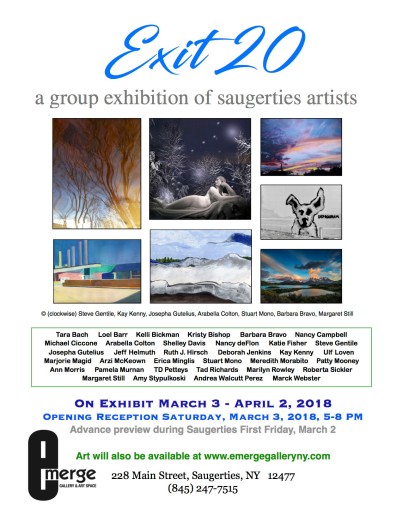 It was also a favorite of Robert Langdon, owner of the Emerge Gallery in Saugerties, because he has chosen it to be exhibited in the gallery’s show, “Exit 20,” opening on Saturday March 3. A wonderful variety of talented artists in all media will have their works on display, so if you’re in the area while the show is running, do come along to enjoy it. Hope to see you there!