October is about fall foliage and about Halloween, but for the thousands of photography enthusiasts who descend on the Javits Center on Manhattan’s West Side each year, it’s also about the grand PhotoPlus Expo. Sponsored by PDN, the PhotoPlus Expo, which comes to New York every October, is nothing short of Photographer’s Heaven for anyone who owns a camera. It offers seminars, workshops, portfolio reviews, and, for those who want just “the basics,” an amazing array of exhibits by vendors of everything a photographer needs, from the highest-end DSLRs to postprocessing software, file storage, books, and lens tissues–plus anything else you can imagine if you’re a photography professional or enthusiast.

On Friday October 24 I took a quick swing through the exhibits to see two of my favorite photographers — local New York guys at that! — who also happen to be outstanding teachers, each in his own way. Robert J. Rodriguez, Jr., who is known especially but not exclusively for his work in the Hudson Valley, was there in his capacity as ambassador for Canson Infinity, the manufacturers of high-quality (to put it mildly) photographic paper. Read his recent blogpost to see how Robert came to represent Canson Infinity. I took a quick photo of him posing next to two of the images he had chosen to exhibit at their booth this year.

Then I caught Rick Sammon while addressed a crowd of people at the Canon exhibit. One of 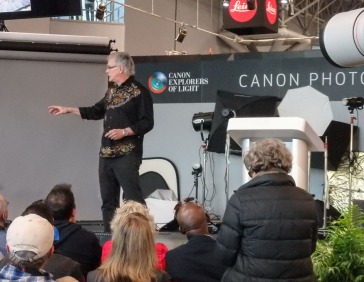 Canon’s renowned Explorers of Light. Rick was also, I believe, signing copies of his latest book, Creative Visualization for Photographers, during PhotoPlus. I’ll be featuring reviews of Rick’s book as well as of Robert’s e-book Insights from the Creative Path in this blog soon.

If you live in the New York area and have never attended PhotoPlus, I recommend you give it a try. It’s always on the last full weekend in October.