When Your Photography Surprises You

Have you ever ventured out, armed not only with your camera but also with some preconceived notions of the images you want to make? It happens to me on week-long visits to New England as well as on half- or full-day trips closer to home. And does it then also sometimes happen that you end up with images radically different from what you thought you were setting out to take — perhaps because the lighting wasn’t what you expected or that tree wasn’t there anymore or etc., etc., etc.? Sometimes that’s a fun part of the game.

And then there are times I go out with no specific ideas for images but just respond to what’s around me. Again, I like the element of surprise.

Here I want to share two images from my recent trip to the northern New England coast, both of places I’d been and things I’d photographed before.  Each had its own unique element of surprise.

The Sunday I decided to drive along the Maine coast toward Ogunquit was sunny and quite windy. After stopping along the coastal road (Rt 1A) to photograph buildings that took my fancy, I ended up, as I knew I would, at the famous Nubble Light. Nubble is probably the most photographed lighthouse in the USA (if not possibly the world, though I wonder whether Peggy’s Cove in Nova Scotia might be a competitor) because it’s so accessible — you just walk up to it. No boats, no sneaking onto private property, no long hikes on soft sand — just drive up, park, and get out your gear.

As you well know, ease of access doesn’t guarantee ease of getting a great photograph. For one thing, it was midday, usually not the optimum time to chalk up any photographic masterpieces. Also, on a Sunday afternoon in early spring chances are quite good of getting people wandering into your otherwise perfect composition.

Well, out of the several images I took, here’s the one I think was best.  What made it work? (1) The clouds. Thank you, Mother Nature. As famed New England foliage expert Jeff Folger observed when he saw it, it looks as if the clouds are emanating from the lighthouse. So, yes, while I did get closer-up images, this with the clouds was “the” image. (2) No people. There was a person off to the left, but I was cropping that side of the image anyway since it had too much superfluous “stuff.”

Photoshop processing, after my usual preliminary moves with the Raw file in Lightroom, was relatively minimal.  I took the image into Nik Viveza, moderately cranked up the Brightness and Structure, and brushed these settings onto the lighthouse and the foreground rocks to make them stand out from the blue water and sky. Back in Photoshop, a very slight degree of opening the shadows in the Shadows and Highlights. And there you have it: my surprise that any of the images taken under less than optimum conditions would be successful.

The second one contained a surprise of a different kind. This is a well-known tree on the New Hampshire coast at Great Island Common (a.k.a. New Castle Common) near Portsmouth.  I first shot it a year ago while out with New England photographer Jeff Sinon, and that time we had the sweet evening light in our favor. This time I was there midday because it took me a good while to find the place due to the weird location of the sign. Actually, I considered this trip a “study” for, hopefully, a revisit later in the day under better lighting conditions, and I used my Olympus SH-1 instead of my Nikon DSLR. 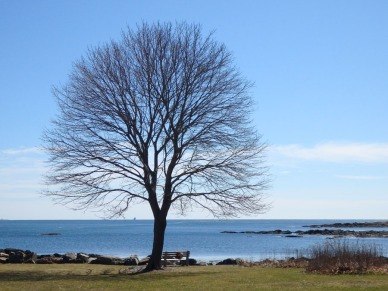 First, here’s the original. A nicely composed image of this venerable tree, but what boring light! What could be done?

On my way to and from this New England trip I stopped for lunch at the same restaurant. Each time I was seated in a different section, and each of those sections had old oil landscape paintings on the walls in which the colors were not natural but nor were they monochrome. They were sort of a tint. I stared at them and thought there must be a way to recreate this effect in appropriate photographs. Information tucked away in my brain for later use.

With a completely open mind I decided to take the image into Nik Color Efex Pro 4 and see what the different presets would do. (Remember my post about letting limitations work for you? My current limitation is that my Topaz plug-ins aren’t saving correctly and so I’m making the best of the Nik Suite.) The first preset I clicked (they’re listed in alphabetical order) was Bi-Color Effects.  As you can see from the screenshot, there’s an extensive selection of color combos, and each of those can be tweaked still further.  I tried them until I came to Moss 4. That was it. And — not that I was consciously looking for this — it somehow approximates that effect of hovering between not-quite-natural and not-quite-unnatural that I had observed on those oil paintings.

Please — let me know what you think! I appreciate your comments. Click here or here if you would like to order a print or other product.

3 thoughts on “When Your Photography Surprises You”