Back in May I wrote a blog post about my “Seen Better Days” series of photographs and the interpretive post-processing of this sort of image. Here is one more extremely important piece of advice for any of you who may be interested in pursuing the Ephemeral, the old, somewhat dilapidated building, with your camera:

If you find yourself passing a building like that on a regular basis and thinking each time, “I really need to plan to take my camera along and just get out and start shooting”–

Just do it. Don’t keep thinking about it. Do it. Sooner rather than later.

In mid-June on a brief weekend trip to the Catskills I discovered that not one but two of my “Seen Better Days” places had been changed–one of them irrevocably and unrecognizably. One was the red wooden building featured in my post in May, in which I showed different ways of processing the photo. In mid-June the door was swinging wide open and there was a huge “For Rent” sign in the window. But the other–the really heartbreaking one–was the Arkville Country Store. Words aren’t needed. Here are the “before” and “after” images.  Which reminds me–that gloriously dilapidated, weed-overgrown house I’ve been eying on Route 17 for months…. 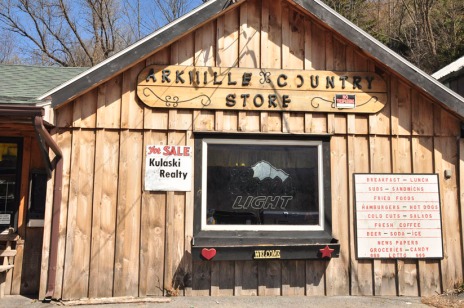