Fellow photoblogger Janice Sullivan nominated me for the 5-day Black and White Photo Challenge. It had been a while since I’d done any serious B&W conversions so I was glad to have this discipline. Below are the photos, with something about each one. Each image was originally posted on my Facebook page.

This is the interior of The Coffee Pot in Littleton, NH; the old-fashioned interior lends itself well to B&W. I had already processed this in color and chose to make the B&W conversion from the psd file instead of from the jpg to which I had added some Topaz Adjust finishing touches. This conversion was made with Nik Silver Efex Pro 2, in which I used the Neutral preset and simply increased the structure a bit as I like the somewhat gritty look that gives. 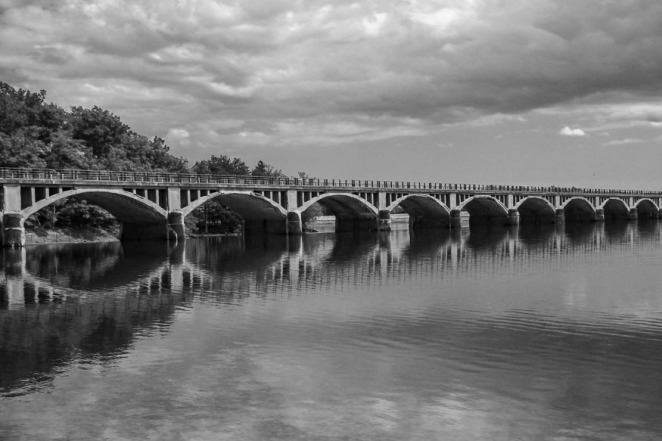 If you know my image Dreamtime at the Ashokan Reservoir, this is another taken on the same day. After preliminary processing in Lightroom 5, I brought it into Photoshop and added a B&W layer, decreased the Cyans and Blues to darken the clouds (and their reflections in the water), and increased the Yellows and Greens to lighten the bridge structure to make it more prominent. I also cropped it a bit from the bottom; without the “dreamy” look of the color image I wanted the bridge to stand out more. 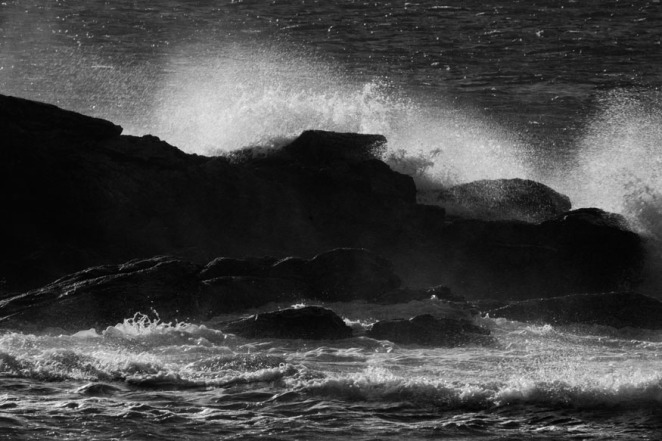 This was taken at the Sachuest National Wildlife Refuge, Middletown, RI, when sun and wind combined for the right conditions early one morning. Observing the waves and trying to capture “the decisive moment” is a meditative experience. Here I was struck not only by the wave action but also by the play of the rising sun on the edges of the rocks. B&W conversion was simply a B&W layer in Photoshop CS5. I darkened the Cyans and Blues at the top of the image to make the contrast with the wave stand out more. 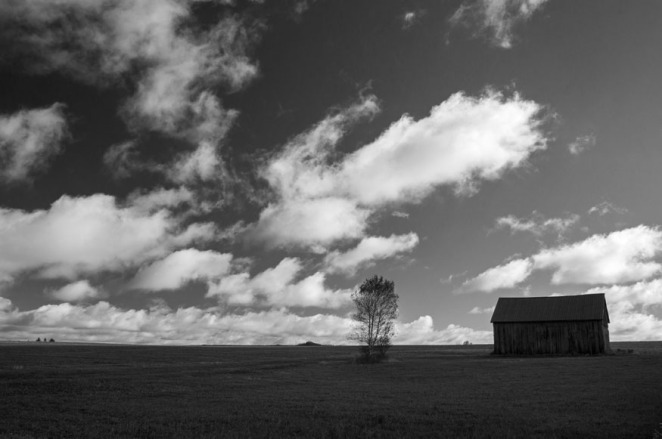 This image of a barn and tree in the Adirondacks first went into Lightroom to increase clarity to enhance detail in the barn and the grass. Then I brought it into Photoshop for B&W conversion by adding a B&W layer. I tweaked the Blues to darken the sky but not too dark, then increased the Greens to bring out more detail in the grass. 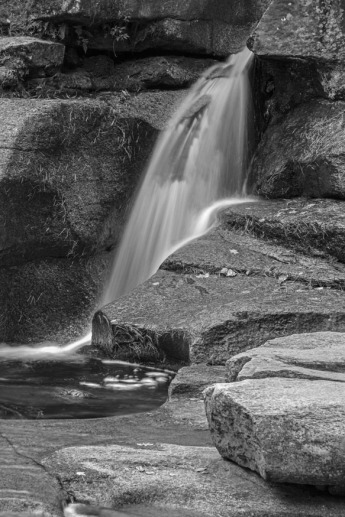 Finally, here is the Diana’s Bath waterfall in New Hampshire. I began by working on my processed jpg, but then decided to take the psd file back into Lightroom to increase the Clarity. That worked! Then back into Photoshop where I added a B&W layer, then tweaked the Shadows/Highlights a bit. In the process, I ended up with a better color version as well.

What do you think? Let me hear from you. If you’re interested in purchasing a print as a gift for yourself or a friend, click on the photo to go through to my FAA website. Thank you for looking. 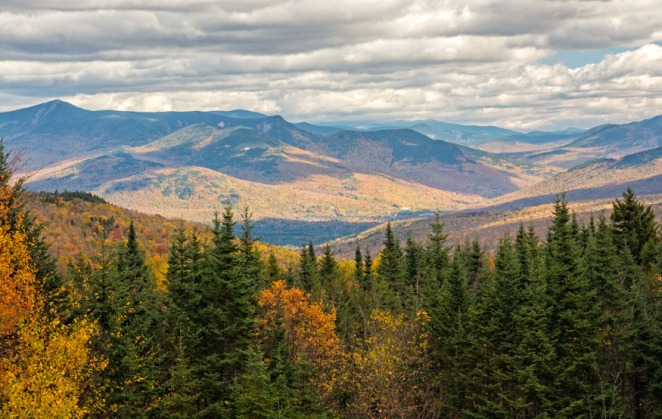 No matter what time of year one visits New Hampshire, those grand mountain landscapes are always an irresistible draw for the camera. Especially (but not only) during foliage season, the scenic vistas along the Kancamagus Highway, Bear  Notch Road, and other major routes (think Rt 302 at Bretton Woods) are magnets for photographers of all stripes.

I enjoy photographing those grand scenes — “lofty mountain grandeur,” as the hymn says. And as long as one clear, sunny day is forecast, I’ll be up and out of my motel room well before the crack of dawn to station myself at Chocorua Lake Road and catch the light show (with luck, the light-and-fog show) over the lake and mountain. But what I find more rewarding is shooting the intimate landscape — particularly forest interiors. It’s a quieter, more meditative process, almost as if I’m waiting for something — a tree trunk or a group of rocks, or a particular arrangement of fallen leaves — to call out, “Hey! Here I am! Look at me!”

A clarification: By “intimate landscape” I mean a scene in which the distance between myself and the closest object is fairly small; I don’t mean macro photography.

Here are some “intimate landscape” images I made on my recent visit to the White Mountains. 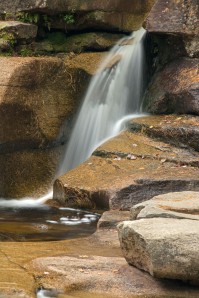 Diana’s Bath. I arrived early enough on a rainy day to be able to shoot without other people getting into the images, but the recent drought hadn’t left much water in this multistream waterfall. I aimed in close and vertically so that the waterfall wouldn’t be lost in a series of rocks and played with the exposure to get a silky-but-not-too-silky look. 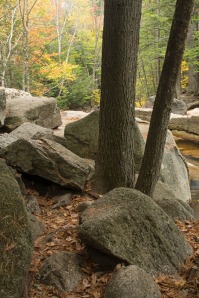 Forest interior. After I made enough images of the actual waterfall, I looked around to see what else might be photo-worthy. Immediately I realized that the scene right before me — the photo to the right — was it. It was as if the tree trunks had bent slightly to let the foliage and the light in the distance be seen. 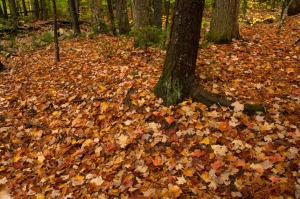 Named for the 19th-century New Hampshire artist Benjamin Champney, this has always been one of the most popular trails along the famed Kancamagus Highway. Not even the fact that the bridge over the stream was destroyed in Hurricane Irene and will not be replaced has changed that. I’ve gotten good forest interiors here before on rainy days, and this time was no exception. When a dry summer has resulted in trees losing leaves rather prematurely, then photograph the leaves on the ground! The varied colors and patterns of those leaves “make” this photo (below), I think. Incidentally, as you can imagine, several of these images required long exposures. It helps that nothing in them was moving, except the water in the waterfalls! 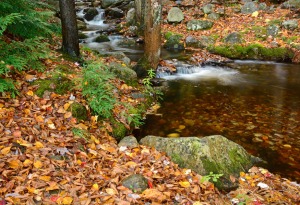 This little waterfall has to be one of the best-kept secrets in New Hampshire, as waterfalls go. It’s not listed in any of the guides. Unless you park in the pullover next to it, you’ll hardly notice it; it’s quite hidden by trees. Long exposure needed again. I didn’t want murky shadows, nor did I want to include too much more of the waterfall above where the photo ends; it made for too busy an image. I wonder actually how much water there would have been had I tried this spot two days earlier; as I said above, the drought had depleted the water in all the falls. I had planned to shoot at this spot on the previous day and set out going north on Route 16, but by the time I reached Pinkham Notch the rain was so torrential and thus the visibility so nonexistent that I turned back. Aside from the safety factor, shooting in a bit of rain is one thing, but drowning your DSLR? Not a good idea.

I hope you enjoyed these images. I’ll continue with more from this shoot in subsequent posts. If you’d like to see larger versions, or perhaps would like one of these restful scenes decorating your home, click on the images themselves or on this link to my site. Thank you for looking!