I was going to call this collection “Dilapidation” until I got a deliciously evocative shot of an alleyway in a rundown town and I didn’t think “dilapidated” really described alleyways. Whereas my historic collection captures the Enduring–buildings such as at New Paltz’s Historic Huguenot Street or in nearby Hurley or the Kingston Stockade District that have been deliberately and lovingly preserved for their aesthetic and historic value–“Seen Better Days” rather preserves the Ephemeral–before the building gets demolished or renovated or succumbs to the ravages of the weather.

My “Seen Better Days” collection lends itself particularly well to black-and-white processing. This can be classic black-and-white, some version of sepia or another “antiquing” sort of look. Some photos can be processed in multiple ways, depending on the interpretation I want to give them. Here I’m going to show you one photo in three different interpretations. 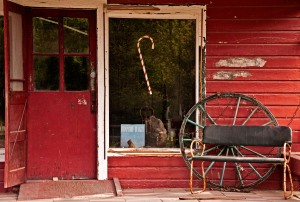 The location of the building is best identified vaguely as “somewhere in the Catskills.” It was for sale and I understand that it has recently been purchased, so obviously I needed to do my work before the new owners do theirs. As I pointed out in my previous blog, if you shoot in color, before you can make a successful monochrome image you have to start with an acceptable color original. The color version here was processed first in Raw and then in Photoshop CS5: some cropping, straightening (it can be difficult to attend to such details during the actual capture when you and your tripod are standing in the middle of a road), enhancing the contrast (and, in Raw, always the clarity), vibrance, and saturation. 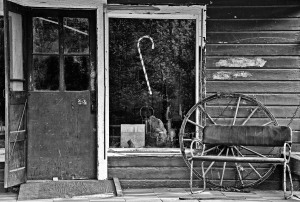 I wanted the first monochrome to be a starkly clinical black-and-white image. Starting with the color image here, I processed it with Nik Silver Efex Pro 2, choosing the Fine Art Process preset and increasing the structure to 72. Even though it’s “starkly clinical,” I consider that it nicely straddles the line between Fine Art and Documentary work. (I’d appreciate your comments on this!) 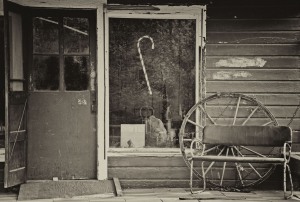 Then I wanted to “reproduce” an old, faded photograph that someone may have kept because they, or their family (parents? grandparents?), lived there a long time ago–during those “better days.” Again using Nik Silver Efex Pro 2, I chose the Antique Plate preset, increased the brightness to 60 and decreased the structure to -4. (I’m obsessed with high structure these days and so it was an exercise in artistic discipline for me to see that I can occasionally live without it and still produce a satisfactory photo!) As a “crossover” I think this interpretation is also a candidate for my Fine Art “Modern Vintage” series.

I’ve sent the photos to some friends and have received different opinions on which ones people liked best. I’d like to hear from you: Which one is your favorite, and why?