Anton on the Diamond Notch trail. Photo by Reiko

The reaction of my friend and author Fr. William Graham to this story encouraged me to share it in a blog post. It began yesterday morning when my son, Anton, phoned me and casually mentioned that there had been an accident involving the commuter bus he sometimes rides from Kingston, NY to New York City but not to worry, he was OK. Well, OK. It wasn’t easy to hear him – it sounded as if there was all this wind blowing around him – surely he could have made the call from inside his office building.

Only gradually did the enormity of the situation reveal itself. The accident had happened at Ramsey in Northern New Jersey, and the bus had left Kingston at 6 am; Anton and nearly fifty other people were still standing outside on Route 17 waiting either for medical/emergency services or a relief bus to take them the rest of the way to the city, choose whichever is appropriate. A tire from a car traveling north on 17 had loosened and gone sailing into the bus’s windscreen, hit the driver, then bounced farther back to hit more people.

Happens I work in Mahwah, just north of Ramsey, three days a week, and was in the office today. Most of the colleagues had heard about the accident or even passed it en route to work yesterday. When I mentioned that my son had been on the bus, one colleague fetched today’s Bergen Record from her car and showed me the photo on front page and the article with more photos elsewhere in the paper. “It’s a good think you didn’t see this before,” she said.  That’s for sure. There was an enormous gaping hole in the windscreen just about level with where the driver’s head would have been.  Had he not quickly ducked when he saw the tire coming, he’d have literally lost his head and fifty people on that bus could have been killed. Despite being injured, he had the presence of mind to maneuver the bus across two or three lanes of traffic and pull over on the side of the road. As it was, the person behind the driver got the worst of it; the medevac took him to the Trauma Center in Paterson, where he was in critical condition. Anton was sitting four rows away from him. 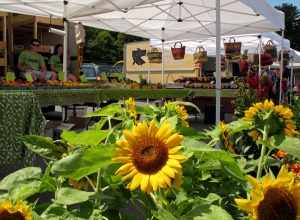 It was when I saw the photo of the passenger strapped on a stretcher and being moved into an emergency vehicle that I freaked out. Anton had said that someone four rows away from him had been hurt and was in very critical condition, and of course I felt bad, thinking about how some poor family member was going to get a phone call…. But what is it about a visual that really throws a situation in your face? Or is it just me, being a photographer and all? There’s something about a visual that particularizes a situation. It’s no longer a general “fifty passengers,” it’s this particular person very seriously injured. A man from Rosendale, the next stop after Kingston on this bus route. Beautiful Rosendale with its rolling hills and farmers market — I have a magnet about the Rosendale farmers market on my refrigerator, from the day a couple of years ago when I stopped, bought a few things, and (of course) took some photos.

Same thing when 9/11 happened. Again, I first heard about it from Anton. He was in the office his firm then occupied in a penthouse on Lower Broadway and he saw both planes go into the towers. For the rest of the day, everyone watched in horror as the events unfolded. But what really brought it home to me was seeing photos of people jumping out of the office windows and you could see the details of the men’s ties flying upward while their bodies were hurtling inexorably downward. And I thought about how they had put those ties on earlier that morning, never thinking that it would be the last time they’d ever have to choose a tie to go to work.

There’s just something about certain visuals that particularizes a general situation and affects you more deeply than all the lists or statistics in the world.

Have you ever had that experience?

Here’s a link to the article about the bus accident. Needless to say, my son managed to take a photo of the scene with his cellphone that incorporated the green “Lake St. Ramsey” road sign, thereby establishing a sense of place.  http://www.northjersey.com/news/1-critically-injured-after-tire-smashes-through-bus-windshield-in-ramsey-video-1.1009014  As I opened this post, so I close it with thanks to my author Fr. Graham, for his prayers.